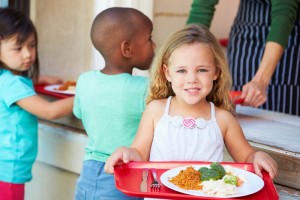 Let’s consider school meals for a moment. Throughout the Western world, many children are given the responsibility to “choose” their school-lunch and as a result are making unhealthy food choices every single day. With items such as hot-dogs, burgers, chips and other processed foods on the daily menu we run the real risk of leaving the child’s brain starved of vital nutrients. This is not going to help when demands are high in a progressive learning environment which requires focused effort and concentration. In addition to a decreased learning ability, the child may develop mood swings as a result of the sugar highs and lows. It is not rocket science but a well-established fact that a persistent unhealthy diet elevates the risk of developing obesity, type-2 diabetes, cancer and heart disease later in life.

The fact is foods can mediate brain function and its signals to positively influence synaptic transmission and plasticity, membrane fluidity and energy metabolism [78]. In fact, depending on the types of daily foods eaten, the results can be polar opposites. Foods can either give rise to health promoting effects resulting in positive affective states, more efficient cell-signalling and overall well-being or contrastingly initiate inflammation, stress and foster addictions giving rise to negative behavioral states such as aggression, pain and depression. There are specific nutrients present in foods which are thought to facilitate brain function at a molecular level and here are a few examples:

The key points are that dietary alterations which form part of a long-term life-style change and not just a fad diet is thought to improve both psychological well-being, mental alertness, physical health and ultimately increased productivity.

Nutritious Minds and Lisa Nash Fitness have teamed up to bring you a 1-Day Workshop: Nurture Your … END_OF_DOCUMENT_TOKEN_TO_BE_REPLACED

In 2011, impressionist, playwright and comedian Rory Bremner was diagnosed with ADHD. In a BBC Radio 4 programme ADHD … END_OF_DOCUMENT_TOKEN_TO_BE_REPLACED