There are a number of unsubstantiated claims concerning the etiology of ADHD. For example, the assumption that ADHD may occur as a result of inadequate parenting practices, watching too much television, socio-economic or single-parent status. There is no compelling evidence to suggest that any of these factors play a prominent role in the development of ADHD. These are arguably unhelpful theories based on ignorance which need falsifying. In fact, ADHD is one of the most common psychiatric disorders, existing cross-culturally with a reported global prevalence of approximately 3% -12% [6, 48]; it is not isolated to specific groups with common environmental factors such as television watching toddlers raised by single parents! Please refer to the Epigenetics section of the website for discussion on the interplay between genes and environment.

There are other prejudices, for example, against the use of stimulant medication and accusations that ADHD is just a money-making psychiatric label. Some of the media headlines and portrayal of ADHD over the past decade have contributed to this complex, confusing and misguided picture. Inaccurate media reporting is often the result of simply getting the message wrong or a failure to accurately interpret the results of clinical trial data. I will refer to Albert Einstein here who once explained “If you can’t explain it simply, you don’t understand it well enough”. The symptoms of ADHD are not at all novel and have been cited in the medical literature dating back to over a century ago. Arguably, the first citing was by the German physician Heinrich Hoffman (1809 -1894). Hoffman described a case report of a young boy presenting with symptoms of hyperactivity, impulsivity and inattention. As well as being a physician, he was a wonderful animator and presented illustrations of a character with these symptoms in his children’s book: The Story of Fidgety Philip based on his observations. At the time, Hoffman called for an “urgent scientific investigation” (1854). 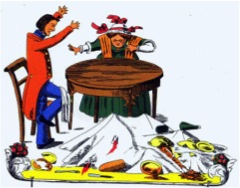 Sometime later, George Frederic Still (1868-1941), England’s first professor of childhood medicine, gave a series of talks (1902) called the Goulstonian Lectures. During these lectures, which were later published in the Lancet, he described 43 children who presented with poor “moral control” (unruly). Still described the children as often aggressive, defiant, resistant to discipline, excessively emotional or passionate, showing little inhibitory volition, problems with sustained attention and seemingly unable to learn from the consequences of their actions -although, their IQ presented as normal. The symptoms he described in 1902 arguably captured the cluster of symptoms associated with the condition we know today as ADHD.

‘But’, I asked, ‘What does it mean – I’ve got ADHD?’
The education psychologist explained that it stands for ‘Attention Deficit Hyperactivity Disorder’ and included symptoms rather like those I had complained about. He said the main symptoms were restless, hyperactive and impulsive behaviours. He reminded me that I also struggled to concentrate, pay attention and finish tasks like homework and schoolwork and that this could be linked to both the dyslexia and ADHD. But first, he explained, that it was important to visit what’s called a clinical psychiatrist who specialised in these conditions to establish whether my symptoms are severe enough that I would receive a diagnosis.

Nutritious Minds and Lisa Nash Fitness have teamed up to bring you a 1-Day Workshop: Nurture Your … END_OF_DOCUMENT_TOKEN_TO_BE_REPLACED

In 2011, impressionist, playwright and comedian Rory Bremner was diagnosed with ADHD. In a BBC Radio 4 programme ADHD … END_OF_DOCUMENT_TOKEN_TO_BE_REPLACED