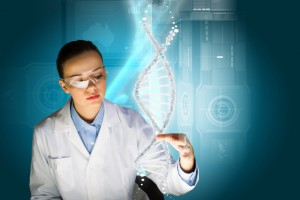 The Human Genome Project began in 1990 and was the largest collaboration of international scientists in biology in history to date. Their task was to sequence the 3 billion bases of genetic information living in human cells and to publically disseminate the findings. In 2004, The International Human Genome Sequencing Consortium was able to make the prediction that each human being has on average 20 – 25, 000 genes; a number much lower than originally anticipated.

In 2010, the UK10K project was launched with the aim of decoding the genomes of 10,000 people within a three year period. The project’s primary goal was to uncover many rare genetic variants that play a role in human disease. Some of the critical questions asked concerned the number of new mutations a child has and whether these came from the mother or the father. The project published some interesting findings; in particular, it found that human genomes (i.e., the entirety of a person’s hereditary information encoded in DNA: deoxyribonucleic acid or for viruses in RNA) are changed by the power of mutation. In other words, our DNA is changed by subtle alterations in its code from that of our parents. If the mutation occurs in sperm or egg cells these will be new mutations not observed in our parents. The majority of the reshuffling of genes originates from our parents; new mutations are the final source from which new variation is drawn. It is estimated that only 1 in 100 million letters of DNA is altered with each generation and therefore finding new mutations is enormously scientifically challenging.

Professor Gilean McVean, lead author of the 1000 Genome study, described each individual in the human population as a walking natural experiment. By this he meant that “some of our genes are switched off, while others are active and some overactive”. It is thought that each supposedly healthy person carries hundreds of rare variants of genes that have an important impact on how genes work, and a few (approximately between two and five) of the rare changes that have been recognized (as variants) contribute to disease in other people. Efforts are currently being undertaken to understand the genomes of children with developmental disorders including ADHD and Autism and the next section will discuss what we know so far. More information on The Human Genome Project can be accessed via their website: http://www.genome.gov/10001772

Nutritious Minds and Lisa Nash Fitness have teamed up to bring you a 1-Day Workshop: Nurture Your … END_OF_DOCUMENT_TOKEN_TO_BE_REPLACED

In 2011, impressionist, playwright and comedian Rory Bremner was diagnosed with ADHD. In a BBC Radio 4 programme ADHD … END_OF_DOCUMENT_TOKEN_TO_BE_REPLACED