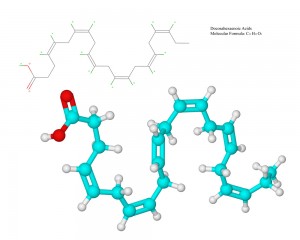 The brain is a massive network and communication system; containing in the region of some 200 billion neurons. Communication across networks is carried out by neurotransmitters which act as chemical messengers and carry, boost and modulate signals between neurons and other cells in the body. All neurotransmitters are coated in a fatty sheath called myelin which is integral to the speed and efficiency of nerve transmission. Consequently when myelin is damaged, the speed of nerve conduction slows down. Approximately 75% of myelin comes from fat and therefore the formation of myelin is dependent on what you eat. DHA is thought to specifically increase neuronal responses by enhancing the flexibility of cell membranes and improve magnocellular functions which are highly relevant for vision health including visual acuity. DHA also stimulates neurite outgrowth resulting in greater and more intricate dendritic branching in neurons enhancing cell-signalling processes [37].

Nutritious Minds and Lisa Nash Fitness have teamed up to bring you a 1-Day Workshop: Nurture Your … END_OF_DOCUMENT_TOKEN_TO_BE_REPLACED

In 2011, impressionist, playwright and comedian Rory Bremner was diagnosed with ADHD. In a BBC Radio 4 programme ADHD … END_OF_DOCUMENT_TOKEN_TO_BE_REPLACED