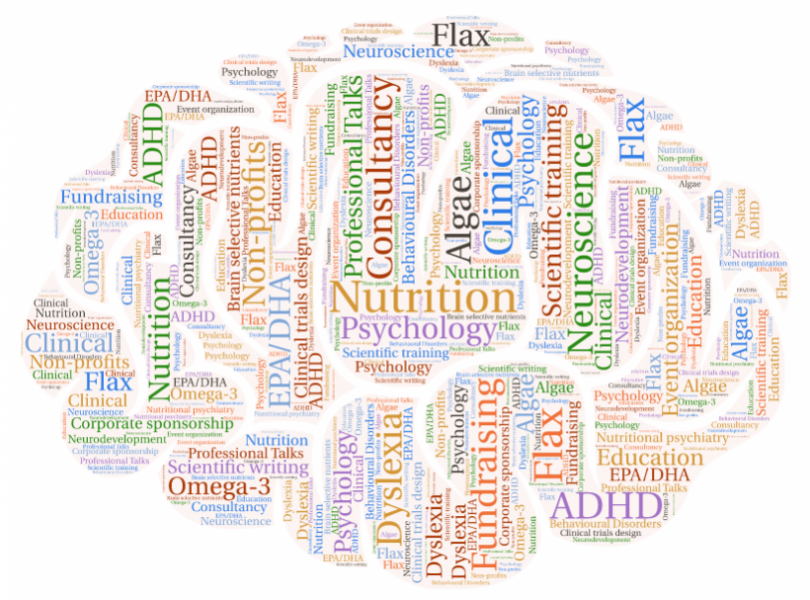 I provide scientific education, training and writing, data-analysis, manuscript preparation, public speaking and event organisation, along with the networking and fundraising skills that help non-profits advance their cause.

I work primarily in the areas of nutritional neuroscience, ADD/ADHD and associative neuropsychiatric disorders, specialising in the beneficial role of omega-3 and other brain-selective nutrients in mental-health.

Rachel V. Gow, PhD is a guest researcher and Lead Associate Investigator of the Neuroimaging, Omega‐3 and Reward in Adults with ADHD (NORAA) trial at the National Institutes of Health (NIH) in Bethesda, Maryland, US. This study was the first randomized, double‐blind, placebo‐controlled, clinical trial to test the effects of omega‐3 fats in the brain activity of adults with ADHD. (Further details of this work can be found at the foot of this page).

Prior to this role, Dr. Gow was awarded a PhD in Child Neuropsychology from the Institute of Psychiatry, King’s College London. During this period Dr. Gow worked in the Department of Child and Adolescent Psychiatry and conducted clinical research in children/adolescents with and without ADHD, investigating blood measures of omega-3 fatty acids and assessments of brain function using EEG and Event Related Potentials. Dr. Gow has a Master of Science in Psychological Research Methods (Distinction) from Birkbeck University of London. Her undergraduate Psychology degree was awarded First Class with Honours from the University of Kingston, London, accredited also by the British Psychological Society.

Dr. Gow has 14 years of academic research and experience in psychological research in both child/adolescent and adult clinical populations. Her current research integrates multiple modalities including functional and structural magnetic resonance imaging, neuropsychological assessment, genetic sequencing and nutrition/biochemistry. Dr. Gow has been a Fellow of the Institute of Food, Brain and Behaviour since June 2013. She has also consulted for major UK non-profits including the Royal Society of Medicine and the Mother and Child Foundation (ongoing).

Dr Gow has published 22 peer reviewed book chapters and scientific papers, and is currently writing a book on Nutritional Neuroscience. She has extensive knowledge in neurodiverse learning and behavioural differences and the effects of dopamine enhancing brain‐selective nutrients. Dr. Gow has provided practical, emotional, educational and nutritional support to families and children with neurodiversities across London. She has been an active member of the International Society for the Study of Fatty Acids and Lipids (ISSFAL) since 2008 and was awarded one of their New Investigator’s Awards in 2012.

I am an active member of the International Society for the Study of Fatty Acids and Lipids (ISSFAL) and in 2012 was awarded their New Investigator Award in recognition of scientific excellence. I have consulted for various non-profit organizations including the Mother and Child Foundation, Food and Behaviour Research, The Royal Society of Medicine and The McCarrison Society. In 2013, the Trustees of The Institute for Food, Brain and Behaviour UK which includes Lord Ramsbotham voted to extend an invitation for me to become a Fellow. Fellowships are considered important in recognizing scientific excellence and expertise and being able to draw upon these to facilitate change in attitudes and in policy.

I have previous industry experience, first as a Clinical Trials Manager (2006-2009) within a large Swiss pharmaceutical company. During this time, I managed the administration of approximately 27 investigator-initiated clinical trials globally. I visited around 20 countries a year providing scientific and educational training to a network of 250 product distributers. I was promoted to “Medical Affairs Manager” (2008) and was responsible for the planning of five-year budgets, the allocation of research grants to academic institutions, key-opinion leadership management and the formation of scientific advisory boards.

I have provided consultancy to a London-based TV production company and documentary film company during an episode of The Food Hospital, broadcasted on Channel 4. I recently provided consultancy to the BBC on an episode of their television series “Trust me I’m a Doctor”. I have given multiple TV, film and radio interviews on the topic of ADHD and omega-3 fatty acids.

MY WORK AT NATIONAL INSTITUTES OF HEALTH, BETHESDA, MARYLAND, US

Lead Associate Investigator of the Neuroimaging, Omega-3 and Reward in Adults with ADHD (NORAA) trial

I received my doctorate in Child Neuropsychology from the Institute of Psychiatry, King’s College London in 2012. Between 2012 and 2016, I successfully completed a post-doctoral research fellow role in the Section of Nutritional Neuroscience (SNN) at the National Institute of Health (NIH) in Bethesda, Maryland, USA. At the NIH, I managed a randomized, placebo-controlled, double-blind clinical trial testing mechanistic actions of omega-3 highly unsaturated fatty acids (HUFAs) in reward processing in adults with ADHD using neuroimaging techniques.

I have 14 years experience in psychological research and mental-health in both child/adolescent and adult clinical populations. My current research integrated multiple modalities including functional and structural magnetic resonance imaging, neuropsychological assessment, genetic sequencing and nutrition/biochemistry. At the NIH, I designed and managed a randomized, double-blind, placebo-controlled clinical trial called the Neuroimaging, omega-3 and reward in adults with ADHD (NORAA) trial (further information here). Specifically, my work sought to identify whether dietary intervention with omega-3 highly unsaturated fatty acids would increase dopamine derived neurotransmitters in the ventral striatum and in doing so mediate the behavioural response to reward.

Previous neuroimaging research has observed the highly replicated phenomenon of “hypo-responsiveness” (that is decreased activation) in children and adults with ADHD compared to controls during the monetary incentive delay (MID) task (see Scheres et at., 2007). Furthermore, ventral-striatal BOLD activation is negatively correlated with parent-rated hyperactive-impulsive symptoms in children. The MID task captures ventral-striatum BOLD activation during the anticipation of monetary rewards using fMRI. These impairments characterized by decreased BOLD activation are thought to be linked to alterations in the activation of dopamine pathways including decreased D2 receptor function. Preclinical studies indicate that dietary deficiencies in omega-3 highly unsaturated fatty acids (n-3 HUFAs) impair dopaminergic neurotransmission. Restoring deficits in dopamine mediated reward dysfunction is central to the pathology of addictive, affective and impulsive disorders. I am also interested in investigating which genetic polymorphisms may affect ventral striatal brain activation patterns in ADHD. Building on from my previous research carried out at King’s College London, I decided to investigate whether facial emotion processing deficits, negative affective states and symptoms of ADHD could be modulated by omega-3 HUFAs by restoring dopamine dysfunction. My study also collected DNA and mRNA in collaboration with Dr. Philip Shaw, a world-renowned expert in ADHD, to identify which genes may be associated with a diagnosis of ADHD. My combined research experience has involved the project management of clinical dietary intervention trials focusing on brain function, developmental psychology, and the neural mechanisms of emotion related processes including reward.

As the Lead Associate Investigator, I played a central role in the intellectual development, design and write-up of the NORAA trial protocol. Furthermore, I was responsible for key aspects of trial activity – from the earliest stages of Scientific Review Committee and Institutional Review Board approval to the development of meticulous standard operating procedures, project management of NORAA team members, recruitment and data collection. I am also responsible for data-analysis, write-up and publication. During the early stages of the NORAA trial, I intuitively formed collaborations with other NIH staff members who are world-renowned in both neuroimaging and genetic fields to maximize the credibility and expertise of the trial and research team.

Nutritious Minds and Lisa Nash Fitness have teamed up to bring you a 1-Day Workshop: Nurture Your … END_OF_DOCUMENT_TOKEN_TO_BE_REPLACED

In 2011, impressionist, playwright and comedian Rory Bremner was diagnosed with ADHD. In a BBC Radio 4 programme ADHD … END_OF_DOCUMENT_TOKEN_TO_BE_REPLACED